Noah’s Ark Veterinary and Boarding Resort began its journey 1998 by the current owner, Mark Boback. After the first three years we were able to add our first kennel building with our indoor/outdoor runs. Soon after in 2005 we added on a second kennel building! Wanting to continue the dream of a “one- stop shop” for pet care, the veterinary office was added in 2008. Three short years later we expanded again, adding the second floor to create a full service veterinary hospital. NAVBR has a staff of about 45 animal lovers in combination of the resort and veterinary.

Our management team strives to provide excellent service and care to you and your pets.

With a degree in business management and administration combined with a passion for animals Mark decided to start Noah’s Ark. The company was established in 1996 and opened for business in 1998. Mark credits the business’ success to all the hard working, passionate, animal loving employees that have made us who we are today. Mark maintains the culture of a family business to attract and retain the best people available to provide optimal care to the pets.

Mark lives local, his home located right in Millersville. He lives with his dog, Cocoa, a chocolate Yorkie. Mark loves to spend his time outdoors. Travelling with his friends and going on fishing trips. He also enjoys maintaining historic cars. But none of that is comparable to the love he has for NAVBR, it’s employees and the pets! 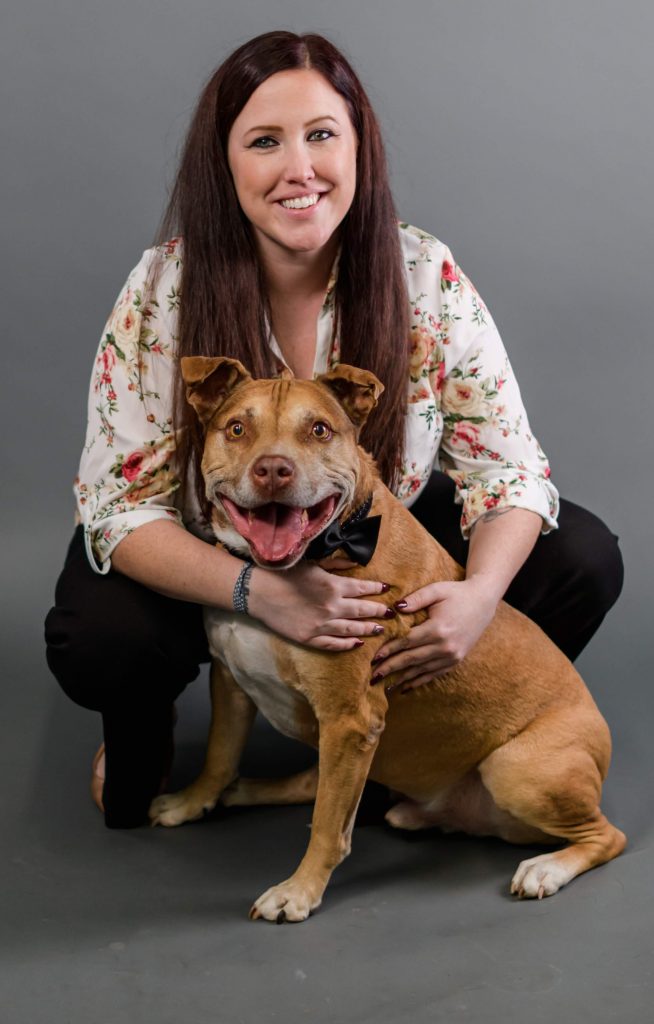 Jenn joined the NAVBR team in June of 2011, with a background in kennel management and the veterinary field. She held numerous positions within the company including being a part of our kennel supervisory team, working as a veterinary technician, and becoming the director of our canine rehabilitation department before settling in as our practice manager in early 2018.

Jenn enjoys spending time with her daughter Gabby and her two American Pit Bull Terriers, Lola and Raiden (Draven pictured – the best boy to ever live, if you ask her), and is actively counting down the days until next Halloween. 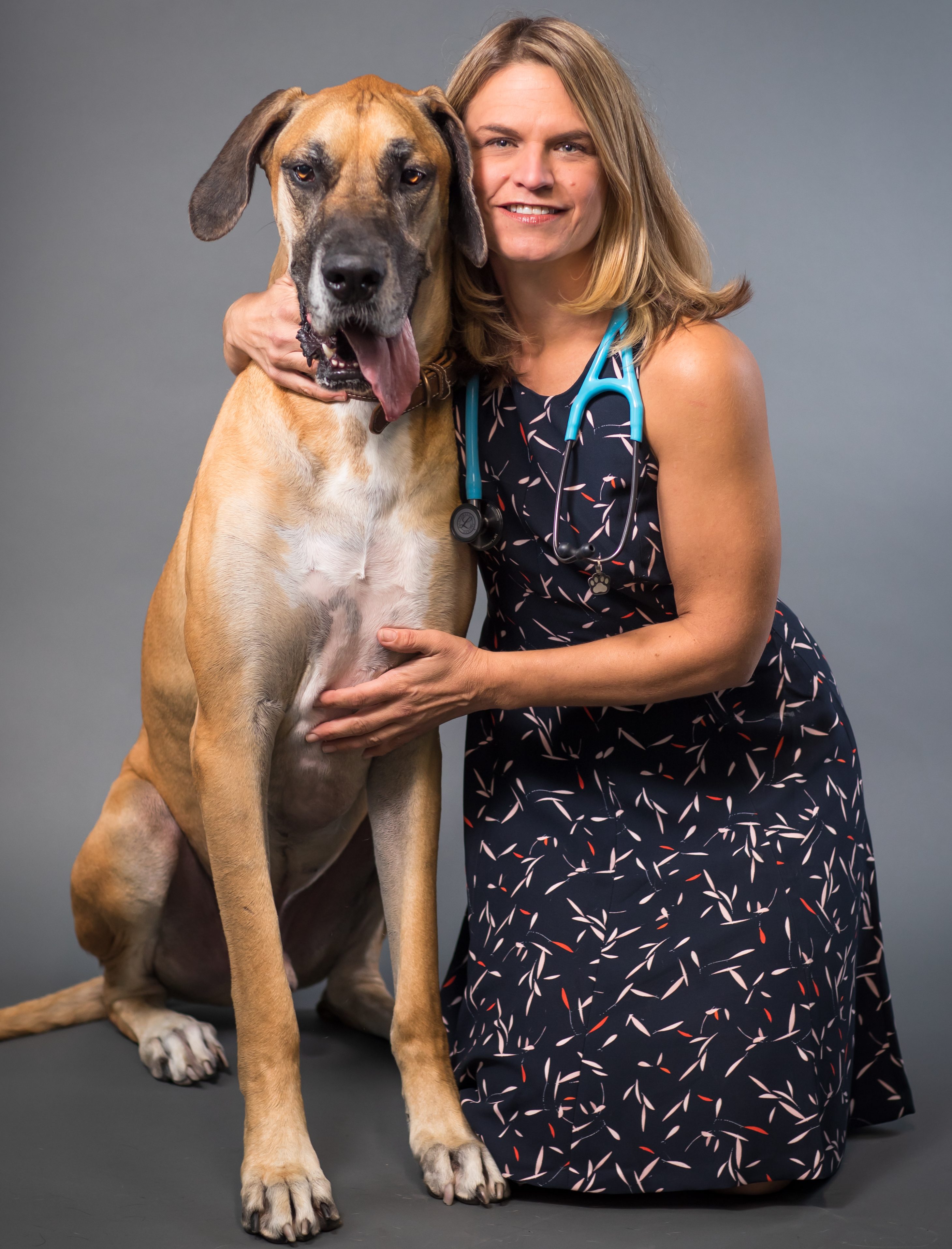 Dr. Gostyla’s love of animals was evident early in her childhood. She grew up in a small town in Connecticut, across the street from cows and chickens and down the road from a fantastic frog and snake catching pond. In the neighborhood there was also a nature center where she volunteered feeding baby raccoons, raptors, and other wildlife. As a child, her family had dogs, cats, hamsters and guinea pigs.
She graduated with a Bachelor of Science in biology from the University of Connecticut in May, 1997. Right after graduation, she spent 2 months camping in the Sierra Nevada Mountains studying golden trout with a PhD candidate. Unfortunately, all good non-paid activities must sometime come to an end, and she had to come home and get a paying job. The idea of turning her passion of animals into a career wasn’t realized until multiple failed attempts at mundane office jobs left her feeling unfulfilled!

In 1999, Dr. Gostyla moved to Boston, MA and entered the medical research field and enrolled in prerequisite night classes to begin her steps toward applying to veterinary school. Along the way she volunteered at the Children’s Museum in Boston and presented eye and heart dissection to educate to visitors. She also volunteered in the large animal neonatal intensive care unit overnight at Tufts School of Veterinary Medicine.
In 2001, Dr. Gostyla was thrilled to be accepted at Tufts University School of Veterinary Medicine and in May, 2005 she graduated with a Doctorate of Veterinary Medicine and a Certificate in International Veterinary Medicine. During her veterinary education, she spent 6 weeks in Kenya studying parasites in wildlife. Although her medical training is imperative to her success in the veterinary field, her 15 years of experience working as a server at various restaurants, bars and comedy clubs has definitely allowed her to maintain her composure during stressful situations!

Dr. Gostyla has been practicing small animal veterinary medicine in Anne Arundel and Howard counties since 2005. She has her Fear Free Certification and is also certified to take Penn-HIP radiographs to determine a pet’s risk of hip dysplasia . She has a special interest in dentistry and other surgeries, and cherishes her client/patient relationships!
Dr. Gostyla lives in Annapolis with her son, Wyatt. She currently has 3 rescued pets, Great Dane, Enzo, a mixed breed dog, Mickle Pickle, and a cat, Lily Velvet. She loves to be outside and near the water. She is certified and a Maryland Master Naturalist of the Coastal Bay Region and is actively involved in oyster gardening.

In her spare time, Dr. Gostyla enjoys cooking, running, paddleboarding, pickleball , and exploring in the woods. She recently participated in her first trail Ragnar in Wisconsin. She is a huge fan of the Boston Red Sox. However, her favorite sporting team is her son’s ice hockey team for which his is playing as a mite! 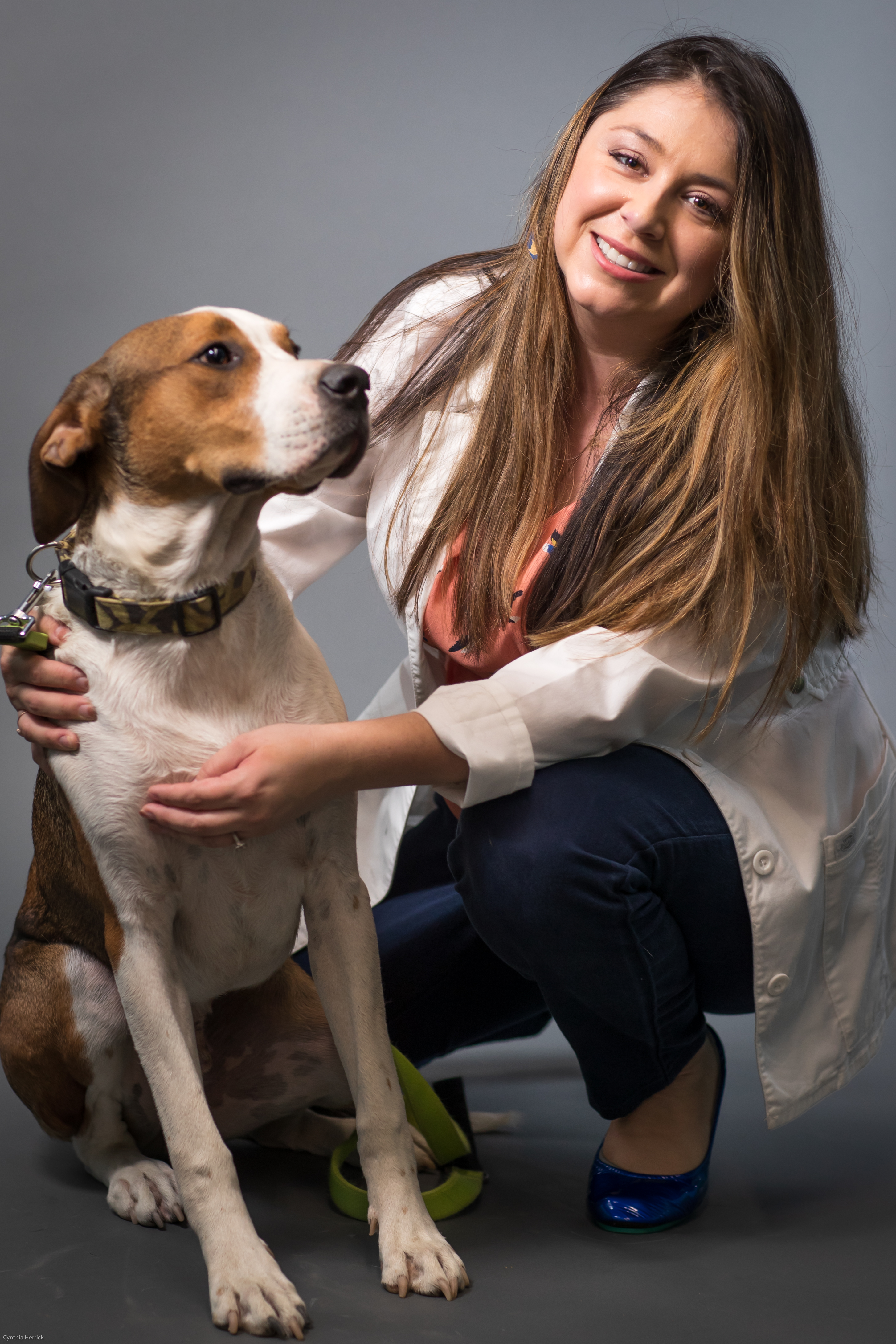 Dr. Raven Martinez-Hernandez grew up in southern Texas.  She attended Ross University of Veterinary Medicine on the island of St. Kitts and Nevis in the Caribbean.  Her final clinical year was completed at Oklahoma State University and she recently graduated in May of 2017.  Although a new DVM, Raven began her veterinary endeavors as a nurse at multiple clinics, avid volunteer in Texas and Maryland, and has over ten years of experience in the veterinary field.  She joined the Noah’s Ark team in November of 2017.

Raven’s love for animals has reached multiple countries.  She volunteered in the Caribbean during her rotations to educate the local population on animal care as well as Guatemala during a VIDA trip to provide medical care and population control.  She has a veterinary focus for cats and dogs, but loves to see small exotic mammals and critters with scales.

Raven spends most of her extra time with her three cats Luna, Ebola, and Dash, puppy Ripley, as well as Johnny, her husband.  She enjoys reading, watching movies, and cooking to entertain for friends and family.  She also likes to attend local events, wineries, and shows. 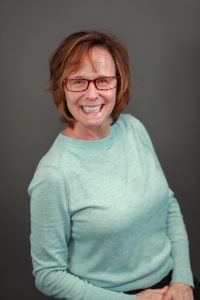 Dr. Holstein (formerly, Carney) grew up in Baltimore, then relocated to the Annapolis area. She received a Bachelor of Science degree from Towson University and a Doctorate of Veterinary Medicine from The Ohio State University, College of Veterinary Medicine. The past ten years of her practicing career were spent at Noah’s Ark. An injury sustained while hiking resulted in time away from the hospital, but she is ready and thrilled to return to her previous position!

Volunteer opportunities have always played an important role in Dr. Holstein’s life. She worked with Maryland Votes for Animals, then testified before the legislature in favor of the state funded spay/neuter program. She has been an advisory board member with the Department of Agriculture representing veterinarians since the program’s inception. For 10 years she spent time as a staff veterinarian for the local wildlife sanctuary, and throughout her career has participated in multiple animal welfare-related community activities. Anyone who knows Dr. Holstein also knows she has a special place in her heart for cats. It is not surprising that when asked, she will tell you her most gratifying volunteer experience has been as a shelter vet for the past 18 years at Rude Ranch Animal Rescue.

Dr. Holstein looks forward to and treasures time spent with her two grown daughters, Danica and Haley. For the past 15 years her personal passion has been catch-and-release fly fishing, primarily in the U.S. but especially on rivers and streams throughout Maryland. 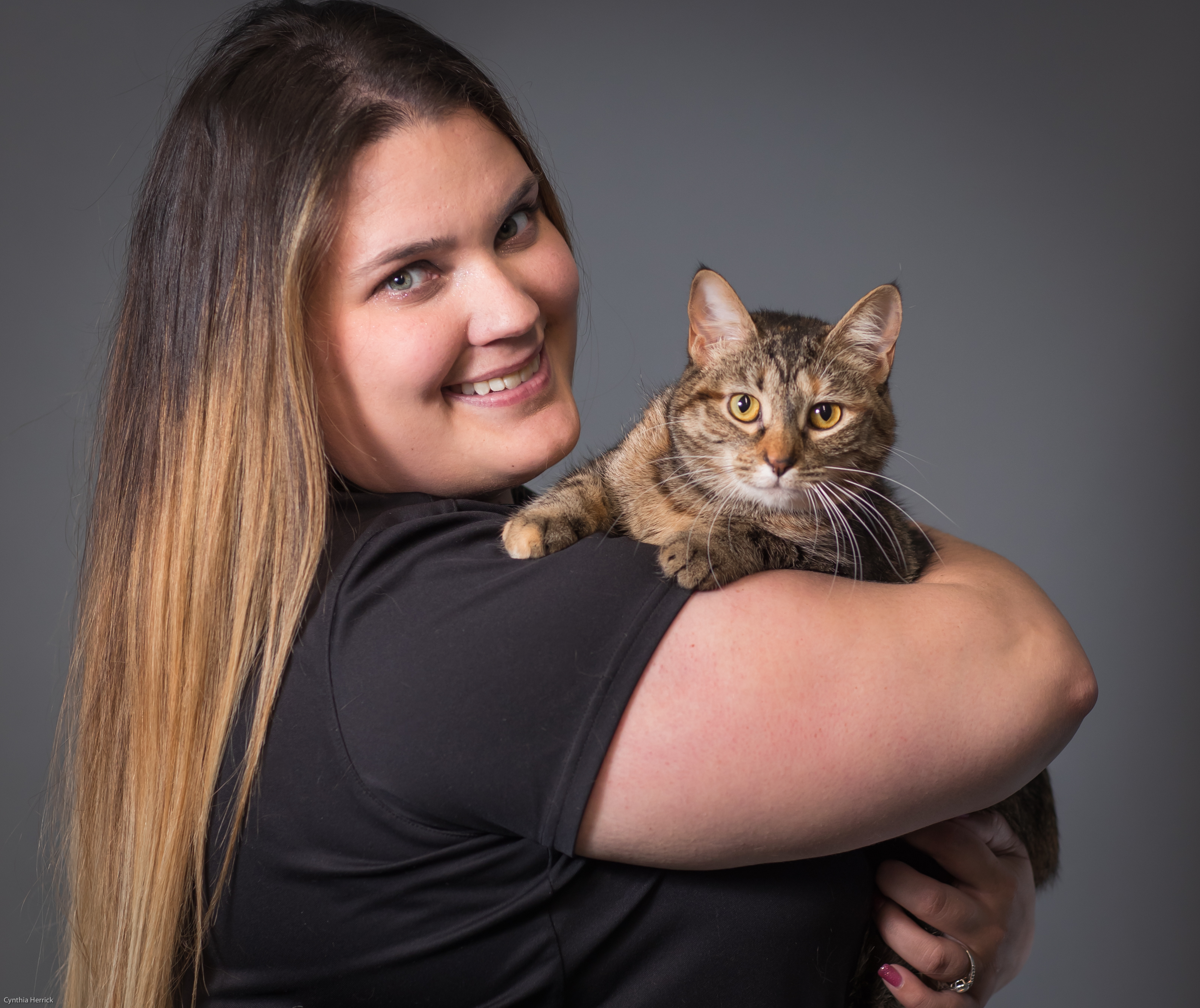 Jess has been working at Noah’s Ark since August of 2014. She started her career as a kennel technician and quickly advanced into the Resort Manager position. Jess has wanted to work with animals since she was a little girl. Her favorite thing about this job is spending one-on-one time with the loving fur babies that come and stay at our resort.

Jess shares her home with two cats named Pheobe and Olivia – both of which she rescued when they were left homeless due to the cost of the care they required. She also has a American Pit Bull Terrier mix named Noah who she rescued as a young pup. In her spare time, Jess loves to spend time with family and friends, attending music festivals, and traveling with her family. 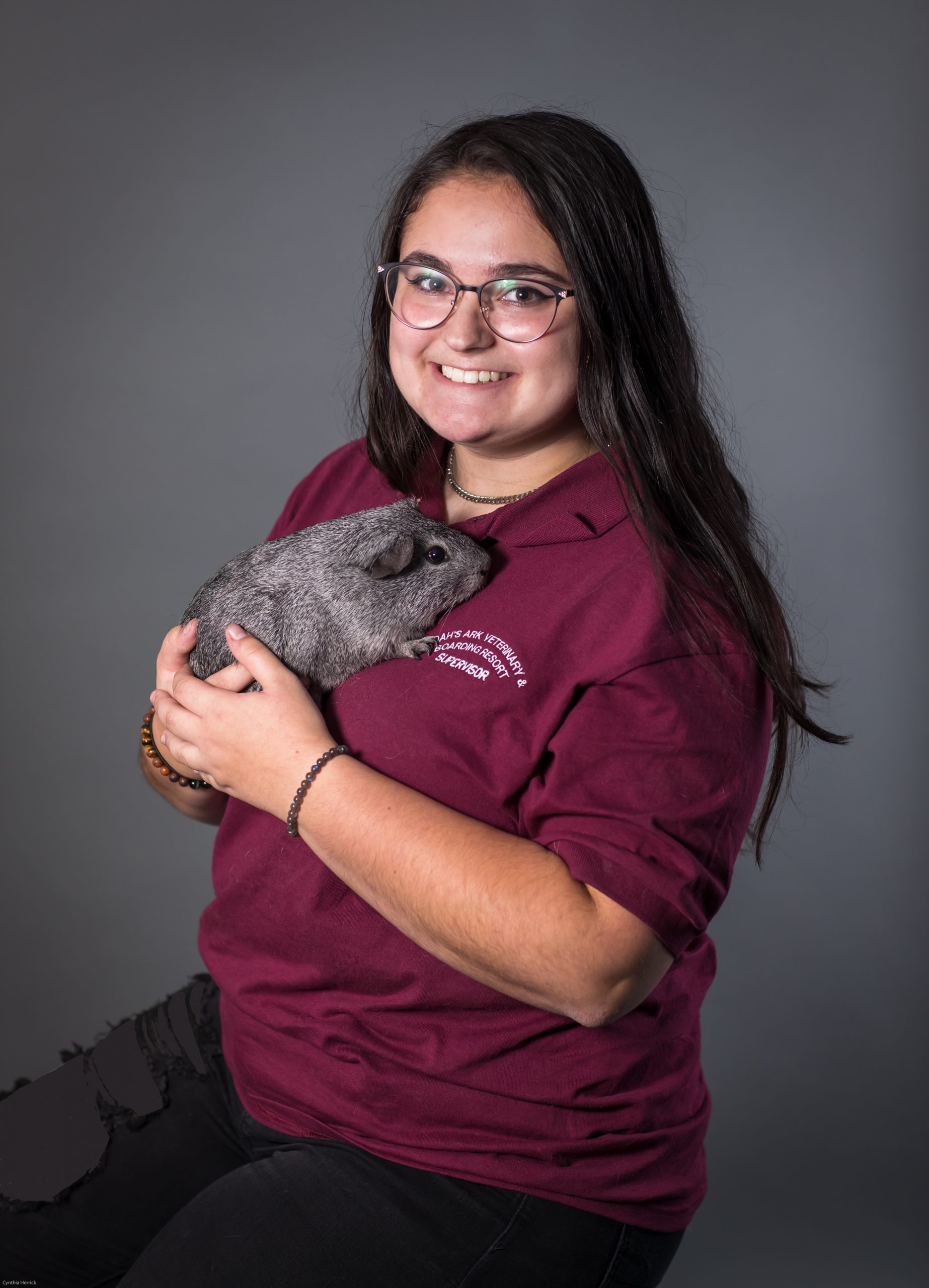 Shelby is currently a student at Anne Arundel County Community College majoring in General Studies. She aspires to get a degree in Animal Sciences and become a registered veterinary technician.

Shelby has two dogs; a bulldog named Levi and a Golden Retriever named Remi. She is very passionate about small animals; caring for two guinea pigs, Sterling and Creedence. She is very interested in mediation, tranquility, and music. 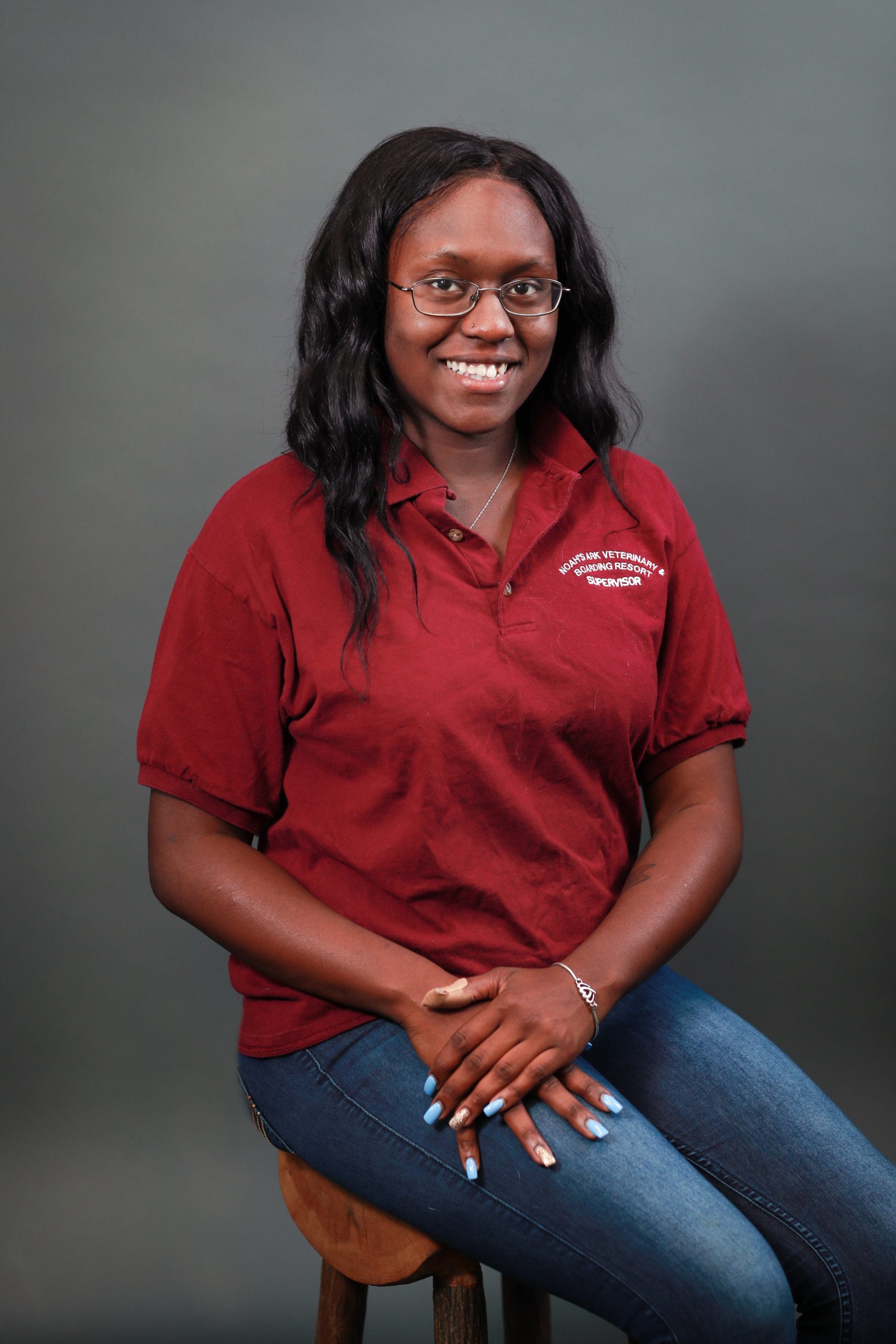 Alantis is currently a student at Anne Arundel Community College majoring in nursing. Although her love for animals is profound, she also has an interest in the human medical field. Alantis spends most of her free time with her beautiful family, Dominic and Chanel. 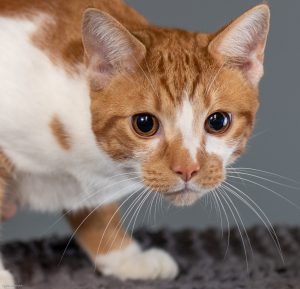 Queso arrived at NAVBR in 2018. He was as stray kitten that was brought to us because they did not think he would thrive living in his current conditions. After recently losing our previous office cat, Chips, we decided he would be a wonderful addition to our family.

Queso spends most of his time lounging around in the resort manager’s office, but he loves to play with his scratching post, cat teaser wand, and interactive egg feeder toy! He can occasionally be spotted supervising our rehabilitation staff. Of course, his favorite thing to do is EAT!

Font Resize
Contrast
Accessibility by WAH
Call Us Text Us